skip to main | skip to sidebar

Zombie Studies Finally Gets the Scholarly Respect It Deserves

Four statisticians at the University of Ottawa and Carleton University have published an article in the peer-reviewed journal Infectious Disease Modelling Research Progress on the subject of zombie epidemiology. It’s entitled “When Zombies Attack!: Mathematical Modelling of an Outbreak of Zombie Infection.” It’s a very math-heavy article, but their conclusion is straight-forward and dire:

An outbreak of zombies infecting humans is likely to be disastrous, unless extremely aggressive tactics are employed against the undead. While aggressive quarantine may eradicate the infection, this is unlikely to happen in practice. A cure would only result in some humans surviving the outbreak, although they will still coexist with zombies. Only sufficiently frequent attacks, with increasing force, will result in eradication, assuming the available resources can be mustered in time.

Well, that was fairly obvious. But now there’s hard science to back up common sense, and the academic community is starting to take the undead threat seriously.

Posted by Monster-Maniac at 10:32 PM No comments:

Dracula & The Mummy
Originally uploaded by matthewkirscht
I Love the "Plus other stories".
Posted by Monster-Maniac at 1:38 PM No comments: 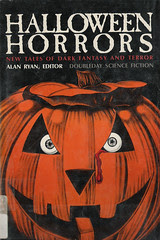 Halloween Horrors by Alan Ryan
Originally uploaded by DK Rising
Posted by Monster-Maniac at 12:09 AM 2 comments: